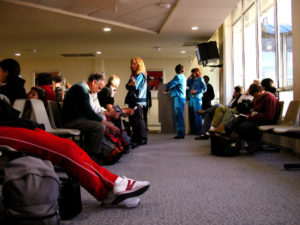 On Saturday, 28th May 2017 at around 11 am, British Airways online servers crashed worldwide for the sixth time in a year leaving behind a chaotic situation on Heathrow and Gatwick Airports and more than 75,000 passengers stranded on planes and airport terminals. The major breakdown on a busy weekend when the majority of the working class was going out for weekend trips was first of its kind, the official website of British Airways remained down for 2 hours while the whole system took a day to recover from the outage completely. The global IT failure had its worst influence on Londoners who were left in the dark and in long queues for the whole day at terminal T5 in Heathrow. At Gatwick International Airport, the incident occurred barely a day after the passengers were asked to leave behind their luggage or hold bags on Friday due to baggage system problem.

After the BA flights worldwide were grounded due to online database failure, it affected travelers all over the world. Some could not check-in either from a smartphone app or from PC, others were there at the airport terminals waiting for the glitch to clear. Soon after 11 am an event, customers had no option but to storm the official Twitter accounts of British Airways. As a result, Alex Cruz, CEO of British Airways issued an online statement in a video message where he apologized to the passengers and termed it as a HUMAN error caused by one of the engineers.

According to the official statement by British Airways, the comprehensive system breakdown was genuinely a human error caused by one of the engineers at IT center. As Alex Cruz said, “an engineer cuts the data center’s power, tried to reboot the system and messed up due to a power surge in the system. The statement carried out by the CEO wasn’t enough to cool down the people, he received a heavy criticism over how insecure BA online system is. Few IT professionals called it an unacceptable reason for such a massive system meltdown. Also, IAG, parent company of British Airways has asked for a report and independent investigation over the incident so that it may not happen next time.

Actually, it was well explained when a company’s leaked email appeared to the public. It said that an IT contractor unintentionally switched off the power button during maintenance bypassing the backup generators and tried to reboot it without making safety measurements. As a result, the system got uncontrolled and led to online blackout according to BBC.

Willie Walsh, who owns the British Airways said that an independent investigation company will conclude the reasons behind it and the report will be made public afterward. The claim by BA official seems legit as system reboot may cause a power surge that could smash up the system. Still, there are certain safety measures, and the power main cannot be switched off or disconnected by mistake. Even for maintenance purposes, a contractor must be escorted by a staff member all-time as per the rules.

Passengers were the principal victims in the massive British Airways IT Chaos. Out of 75,000 people suffered that day, most of them got stuck at Heathrow and Gatwick Airport terminals. BA flights worldwide stayed ground during the tragedy, the travelers were forced to stay inside planes or airport terminals without any complimentary in-flight services. The first public reaction was seen at the Heathrow when the customers started panicking after it started. the next reaction was on Twitter and Facebook heavily criticizing the online services of the company. The overseas BA passengers were asked to pay for getting food and drinks on the plane. Few complained about being misinformed by the flight staff about what actually happened.

Video: Chaos in Heathrow Airport due to BA flights cancellation